2 weeks ago
Internet of Things

Wireless Sensor Networks (WSNs) can define as self-configured wireless networks without the infrastructure to monitor physical or environmental conditions such as temperature, sound, shaking, pressure, motion or contaminants and to Cooperatively transmit your data across the network to a primary location or sink where the data can be observed and analyzed. A receiver or base station acts as an interface between users and the network.

The required information can be pulled from the network by injecting queries and collecting the results from the receiver. Typically, a wireless sensor network covers hundreds of thousands of sensor nodes. Sensor nodes can communicate with each other utilizing radio signals. A wireless sensor node equips with sensing and computing devices, radio transceivers, and power components.

Wireless Sensor Network (WSN) nodes inherently limit resources: they have limited processing speed, storage capacity, and communication bandwidth. Once the sensor nodes are deployed, they are responsible for the self-organization of suitable network infrastructure, often with multi-hop communication. Then the onboard sensors start to collect interesting information. Wireless detection devices also respond to requests sent from a “control site” to execute specific instructions or provide detection samples. 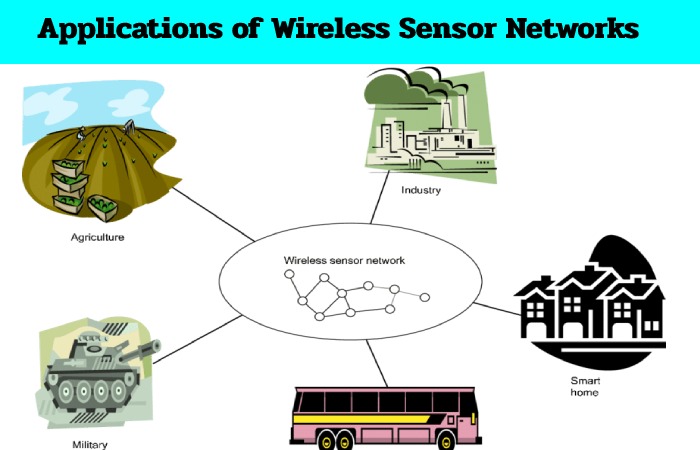 Wireless sensor networks gain tremendous popularity due to their flexibility in solving problems in different application areas and have the potential to change our lives in many different ways, such as:

In zone monitoring, sensor nodes are deployed over a region where a phenomenon is monitored. When the sensors detect the monitored event (heat, pressure, etc.), the event is reported to one of the base stations, taking appropriate action.

WSNs collect real-time traffic information and then integrate it into transport models and alert drivers to congestion and traffic issues.

The term Environmental Sensor Networks was developed to cover many applications of WSN in earth science research. This includes the detection of volcanoes, oceans, glaciers, forests, etc. Some other important areas are listed below:

Wireless sensors can monitor movement in buildings and infrastructure such as bridges, overflights, dams, tunnels, etc., allowing engineering firms to monitor assets remotely without the need for expensive site visits.

The use of a wireless network frees the farmer from the maintenance of wiring in a hostile environment. Irrigation automation enables more efficient use of water and reduces waste. 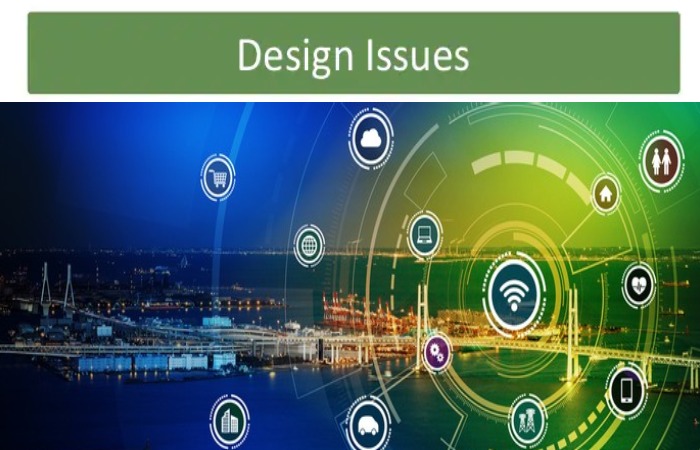 Deploying sensor networks that are a superset of those found in ad hoc wireless networks poses many challenges. Sensor nodes communicate over lossy wireless lines with no infrastructure. An additional challenge relates to supplying limited, generally non-renewable energy to sensor nodes. To exploit the useful life of the network, protocols must design from the beginning to manage energy resources efficiently.

Sensor nodes are vulnerable and are frequently deployed in a hazardous environment. Nodes can fail due to hardware difficulties or physical damage or by draining their power supply. We expect node failures to be much higher than typically seen in wired or infrastructure-based wireless networks. The protocols implemented in a sensor network must detect these faults as early as possible and be robust enough to handle a comparatively large number of faults while maintaining the overall functionality of the network. This is particularly relevant to the design of the routing protocol, which must ensure that alternate routes are available to forward packets. Different deployment environments have different fault-tolerance requirements.

The scale of sensor networks ranges from several nodes to several hundred thousand. Furthermore, the density of implementation is also variable. To collect high-resolution data, node density can reach the level where a node has several thousand neighbours within its transmission range. The protocols implemented in the sensor networks must be scalable at these levels and maintain adequate performance.

Given that of the names of models of deployment considering the nodes of sensors as cable devices, the networks of sensors cannot compete with the traditional approaches of collecting information that if the nodes of individual sensors can produce low price. The expected target price for a sensor node should ideally be less than $ 1.

Although WSNs evolve in many ways, they still resource-limit networks in power, computing power, memory, and communication capabilities. Among these limitations, power consumption is of the utmost importance, as evidenced by many algorithms, techniques and protocols that develop to save energy and thus extend the life of the device. Maintaining the topology is one of the most important aspects studied to reduce energy consumption in wireless sensor networks.

Communication between nodes usually implements by radio communication on popular ISM bands. However, some sensor networks use optical or ultraviolet communication, and the latter has the advantage of being robust and virtually interference-free.

As we have seen before, many challenges in sensor networks revolve around limited energy resources. The size of the nodes bounds the size of the farm. The design of software and hardware must carefully take into account energy efficiency issues. For example, data compression can reduce the amount of energy used for radio transmission but uses additional energy for computation and filtering. Energy policy also is contingent on the application. In some applications, it may be acceptable to shut down a subset of nodes to save power, while other applications require all nodes to be running simultaneously.

Structure of a Wireless Sensor Network

A star network is a communication topology in which a single base station can send and receive a message to multiple remote nodes. Remote nodes cannot send messages to each other. The advantage of this kind of network for wireless sensor networks includes simplicity, the ability to minimize power consumption of remote nodes. It also enables low latency communications between the remote node and the base station. The downside of such a network is that the base station must be within the radio transmission range of all individual nodes and is not as robust as other networks due to its dependence on a single node to manage the network.

A mesh network allows data to transmit from one node to another node in the network that is within its radio transmission variety. This allows multi-hop communications, i.e. if a node wants to send a message to another node outside the range of radio communications, it can use a node intermediary to transmit the message to the desired node. This network topology has the benefit of redundancy and scalability. If an individual node goes down, a remote node can still communicate with any other node within its scope, which, in turn, can forward the message to the desired location.

In addition, the range of the network not necessarily limit by the range between individual nodes; it can extend by adding more nodes to the system. The downside of this type of network is that the power consumption of nodes that implement multi-hop communications is generally higher than for nodes. It do not have this capability, limiting the lifespan of the network drums. Further, as the number of communication hops to a destination increases, the message delivery time also increases, particularly if the low power operation of the nodes require.

A hybrid between a star network and a mesh network provides a robust and versatile communication network while maintaining the ability to minimize the power consumption of wireless sensor nodes. In this network topology, low power sensor nodes not activate with the ability to forward messages. This helps to minimize energy consumption. However, other nodes in the network enable multi-hop capability, which allows them to forward messages from low power nodes to other nodes in the network. Usually, nodes with multi-hop capability are of higher power and, if possible, often connect to the power line. This the topology implement by the new mesh network standard known as ZigBee.

Also Read: What is the IoT? – Important, What Technologyies have made, and More

In addition, you can read more helpful posts at techqueer

Usenet: A New Way to Share Information or the Original Version of the Net?

Technologyify, 7 months ago
Internet of Things

Technologyify, 11 months ago
Internet of Things

Technologyify, 12 months ago
Internet of Things